In Which The Misplaced Hoosier Visits Pensacola, Florida for Vacation 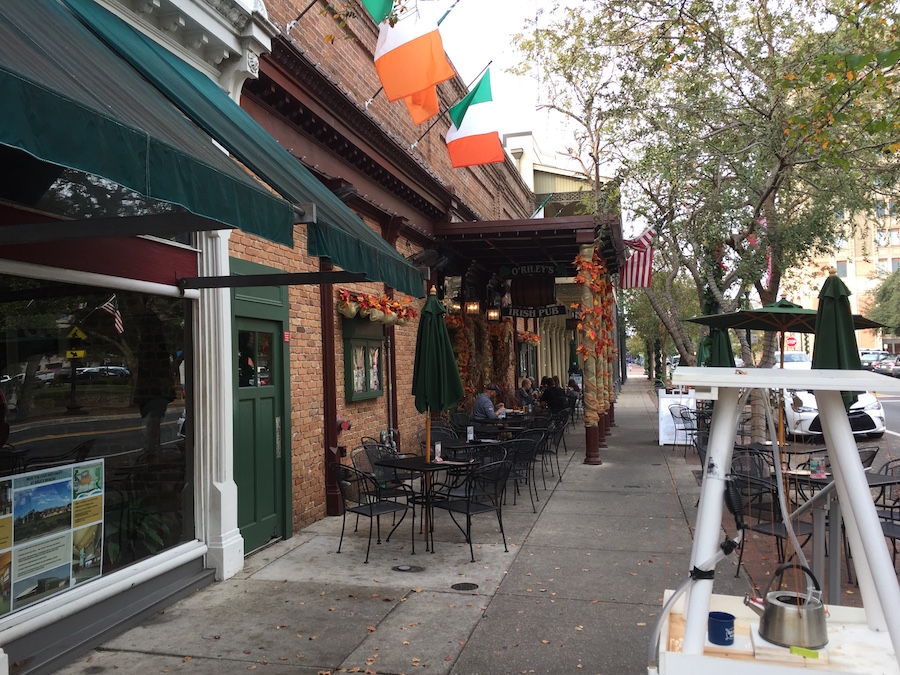 When you move to the place where you vacationed, there’s no need to leave.

When you move to the place where the rest of the world comes to, why do you need to go anywhere else? Sit here long enough, and your former part of the world will come to you.

While I’ve left Orlando a few times in the two years I’ve lived here, it’s always been for work or to visit someone, never because we wanted to “get away from it all.” Orlando is the place where “it all gets to.”

So it felt a little weird to drive seven hours north and west to Pensacola, Florida for a short vacation.

I was scheduled to read at the Funny Side Of Florida event as part of Pensacola’s Foo Foo Festival, the annual arts festival put on by different arts organizations in the Pensacola area. The West Florida Literary Federation was putting on this year’s humor-themed literary event, and they were good enough to invite me up to read a few of my humor columns. We had worked this out way back in the summer, and I had been looking forward to it.

I was going to read with Leanna Conley, a local comedian (formerly of Second City and the NYC comedy scene) and writer, and Craig Pittman, the environmental reporter for the Tampa Times newspaper and author of Oh, Florida!: How America’s Weirdest State Influences the Rest of the Country (affiliate link).

The event was going to be held on Thursday night at the Artel Gallery, and the three of us were going to teach a humor writing class earlier that day in the Pensacola Little Theater.

The only problem was this was all happening over my son’s birthday, so rather than me missing anything, we decided to take the whole family up to a new part of Florida as part of his celebration. We turned what could have been a 2-day/1-night trip for me into a 3-day/3-night trip for all of us. We even took the dog.

After taking two hours longer than we had originally intended — it always takes us longer to get where we’re going — we finally arrived at the Candlewood Suites in Pensacola late, late, late on Tuesday night. A few more hours, and we would have run into morning rush hour traffic. Still, we tend to stay up late as a family, so this was not too much of a problem.

My kids and I made a stop at the Blues Angel music store just a mile or so west of Downtown Pensacola. My kids are all musicians, so I like to take them to music stores when we’re on the road so they can see the musical instruments and be immersed in their chosen mediums. “Maybe it will inspire you to greatness,” I tell them.

This is the same excuse I give them when I want to visit bookstores later.

Wednesday afternoon, we headed to Downtown Pensacola to scout out the location. I had gotten a tip from the organizer, John, that the Tin Cow was the best place to get a burger in Pensacola, and it was just a few blocks from the Artel Gallery. So we parked and walked a few blocks to the restaurant admiring the downtown along the way.

Downtown Pensacola has apparently undergone a transformation in the last few years, turning into a 5-block stretch of shops, restaurants, and bars. Anything the discerning shopper and Pensacola tourist could desire.

We window shopped and ooh-ed and aah-ed our way to the Tin Cow, but didn’t actually get to stop. Everyone was hungry by 1:00 PM — something about getting up at 9 am and eating a very small breakfast — and we’ve committed to a simplified lifestyle, which does not lend itself to buying a lot of new stuff. (I’ll sneak in the occasional book when my wife isn’t looking, but otherwise, we’re trying to avoid accumulating things.)

The Tin Cow (102 S Palafox Pl.) is a burger lover’s paradise. We all tried the build-your-own-burger, each creating our own masterpieces. Instead, we tried the Blue Balls, angus meatballs stewed in Rogue Dead Guy Ale and topped with blue cheese. Table consensus was that it was pretty good, and everyone seemed to like it.

I was a little afraid to try the Lionfish Dip, since lionfish is normally poisonous. Our waiter assured us they cut off all the poisonous bits, but I remembered that episode of The Simpsons when Homer at a piece of blowfish sushi and they thought he might die, so we skipped it.

I built my own with a brioche bun, jalapeño cheese spread, pickles and jalapeños, and roasted garlic aioli. It was a good burger, and not too spicy. It got a bit messy, and I probably should have skipped the jalapeño cheese spread in favor of a nice cheddar. But I still loved it. Everyone else in the family got a variation of their favorite burger. The Tin Cow also has bison, venison, and “American Kobe” meat choices, as well as a gluten-free bun option.

Afterward, it was down to the Artel Gallery to get a look at the venue and get an idea of where I would be reading. My wife Toni was also going to sing a little bit that night, while the normal band took a break. Afterward, we all walked over to the Pensacola Little Theater to look at where we would be teaching our writing classes the next day.

The Pensacola Little Theater puts on musicals, comedies, dramas, and children’s shows, as well as adult and youth classes in acting and theatre skills. They also host the Pensacola Ballet and the Improvable Cause, Pensacola’s local improv troupe. The PLT is housed in the old Escambia County Court of Records Building and Jail, which was built in 1911. They also host 24 or so other community arts organizations, including my host, the West Florida Literary Federation.

Still tired from our late night and fairly early morning, we headed back to the Candlewood Suites for a night of movies and rest.

The next day, I left the family on their own and got a lift back downtown to meet Leanna Conley (@LeannaArts on Twitter) for lunch at Carmen’s Lunch Bar (407 S. Palafox Pl.), just a couple blocks south from the Artel Gallery. I had the chicken salad sandwich, which was a fancy chicken salad on a Ciabatta roll. I almost wavered and got the Julie’s Famous NC BBQ, but I knew that as sure as I did, I was going to end up with some of it on my shirt, and I was getting ready to speak in public.

Leanna and I had a great lunch and got to the PLT in time to teach our classes. After that, it was off to the Artel Gallery for our readings.

The readings themselves were great. I can’t speak for Leanna or Craig, but I enjoyed myself immensely. Of course, I always like speaking in public and reading my work, so I was in my element. It has helped immensely to read my work at the Writers Of Central Florida events in Orlando, so I was fully prepared for the evening. People laughed in all the right places, said “ooooooh” when I told certain political jokes, and made me feel like the years I’ve spent writing these humor columns were all worth it.

The Artel Gallery (223 Palafox Pl.) is a local art museum dedicated to providing the people of Northwest Florida with a continuous source of art and arts education. They rotate out their showings every 5 – 6 weeks, and will sometimes hold juried shows, solo exhibitions (by invitation), and even host the Cinco Banderas competition. They have a great outreach program to local artists, as well as classes for children and people with developmental disabilities.

We got to see some of the exhibits for the Cinco Banderas competition the day before, but by Thursday afternoon, they had moved everything around and placed enough seating for about 30 or so people to hear the three of us regale them with funny experiences, life stories, and in Craig’s case, some of the events and people that make Florida the source of so many weird news stories.

Friday morning, we slept in, thankful we had decided to stay one extra night. We had originally planned on leaving Thursday night, which would have gotten us home around 6 am the following day. Instead, we took our time heading home, driving along US 98 between Pensacola and Destin, the stretch of highway locally known as “The Redneck Riviera.”

But before we left, we stopped at one more highly-recommended restaurant, Red Fish, Blue Fish, there on Pensacola Beach, the little stretch of beachfront island in the Gulf of Mexico. (We nearly rented an Airbnb in that area, but the cleaning fees for our dog made it nearly $100 more than the Candlewood Suites, which also allows pets.)

My youngest daughter and I loved the fish tacos, while everyone else had some sort of sea food dish. Hey, when your restaurant’s table looks right out over the ocean, you don’t get the burger. Even my son got the fish and chips, which looked like they’d be the envy of every Irish pub this side of the Atlantic.

We took a break at John Beasley Park in Fort Walton Beach on Okaloosa Island (1550 Miracle Strip Pkwy SE) and dipped our toes into the Gulf of Mexico. Other than my wife, this was everyone’s first time to feel the Gulf of Mexico on our feet.

The ocean was surprisingly calm — I’m told there are usually great waves in the summer — and the weather was a little cool. That’s a perfect day at the beach for me, so I enjoyed it. Still, we were trying to get back home, so we only spent 30 minutes or so there before we got back into the car.

It was getting late enough, we didn’t do anything too terribly fancy for dinner, other than stop at a Subway in Gainesville, and got home by 11 pm that night.

Pensacola is a city of roughly 52,000 people with a vibrant downtown and arts scene. It’s also known as the “Cradle of Naval Aviation,” so there are a lot of retired military folks in the area, many of them who were no doubt stationed at Naval Air Station Pensacola and just decided to stay. Plus, it’s the home of the Blue Angels flight demonstration squadron. If you’re a naval history buff, you’ll want to check out the National Museum of Naval Aviation.