Day 24: In Which I See My First Pride Parade

So the Orlando Come Out With Pride Festival, and Saturday’s Pride Parade, is a big deal.

My friend, Clay Rivers, invited me to watch the Pride Parade with him and a few friends. So I spent the day Saturday running errands and exploring — I’m really intrigued by the neighborhood called Mills 50 — before meeting him in front of his friends’ condo on Central.

The parade route itself was roughly a mile in length, and the parade lasted for about an hour, which we assumed meant the parade was a mile long.

The parade was what you would expect — lots of floats, lots of people marching, a few horses, but only a few bands. There were a few notable groups: The Wells Fargo horse and carriage, NASA’s gay employees, the National Gay Pilots Association, Bank of America, and even Lockheed Martin had a (small) presence.

There were several universities with groups, and Tampa Pride even showed up. But I was pleased to see Walt Disney World’s entry, with a beautiful carriage drawn by a couple horses, with one guy standing in the back and waving.

“Disney was giving same sex partner benefits to its employees long before anyone else did,” said Clay. Clay used to be “in entertainment” at Disney World, which is the there-might-be-kids-around code word for “costumed character.” He spent a lot of years there, and even detailed some of his time in his book, Walking Tall. Clay is four feet tall, and often played Donald Duck; only people below a certain height are able to play Donald.

“Ph-p-p-p,” I piffed. “At least Disney World sent a carriage. They couldn’t even be bothered to send a mode of transportation.”

Then more people from Universal came by.

And then a pair of people in colorful lamé on stilts went by. 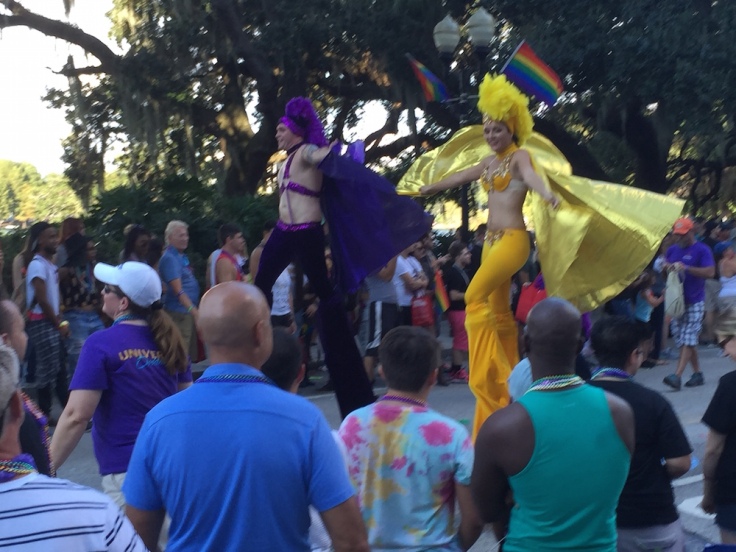 “Oh,” I said. “It looks like Universal beat Disney.”

And they kept on coming. In cars, on bikes, and on foot.

After a while, Clay said, “Disney only sent one guy on a wagon?”

Still, it was an understated-yet-elegant presence. It was like the Queen acknowledging your specialness. It was a “We recognize and appreciate your presence, and it pleases us.” But in a cool, not condescending way.

But Universal was all “WE WILL CRUSH YOU WITH OUR LOVE AND ACCEPTANCE!!”

Hell, even Spider-Man showed up. And if Spider-Man supports gay pride, you know you’re on the right side of history.

But what was weird about the whole day, what really bothered me, were two people, about 50 feet to my left.

Two people, holding up signs. Protest signs. Not hateful signs, per se. But signs that were very anti that day. And I kept looking at them for the first 20 minutes.

Two Christian fundamentalists, holding signs that said, “Turn from pride to Jesus,” “Jesus saves from God’s wrath,” and “Humble yourself before God.” 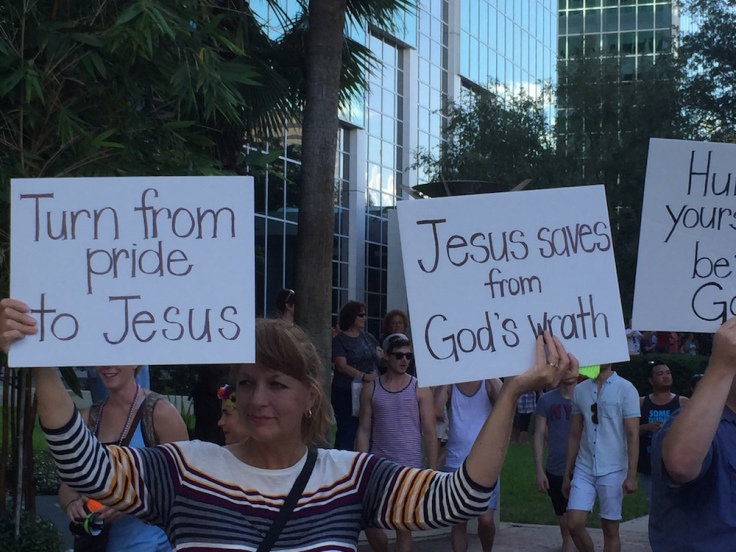 On the one hand, I felt a little embarrassed for them. And I thought they should have been ashamed of themselves. They were literally outnumbered many-thousands to two.

Had they been at any other event, like two Colts fans at a Patriots game, wearing their jerseys and holding up signs that say, “Tom Brady is a cheater,” they would have had their asses kicked.

But other than a few people hollering “God loves everyone” at them, they were otherwise left alone.

And that’s what they should be ashamed about. The whole Pride festival was about gay people being proud of who they were, unashamed, and not made to feel afraid or wrong.

But here were two people who apparently aren’t satisfied with their own lives, so they have to make others’ lives miserable, holding up signs meant to rain on this parade. And people left them alone.

I can tell you, they were absolutely safe, they weren’t intimidated or picked on, and they stood their for the whole hour, holding up their tiny signs, and when it was over, they left, untouched.

Whatever else they may have thought, I hope those two recognized that even they were welcomed that day, because no one did anything to them.

There were even plenty of churches who were in the parade. Those were the people who embodied the love of Jesus Christ. Not the haters with the signs.

But my favorite moment, the moment that really teared me up, was when the PFLAG group walked by.

Throughout the entire parade, everyone was hooting and hollering and whistling. They were having a great time and a lot of fun.

It was like a train approaching. The clapping got closer and closer, and the cheering got louder. When the people on the sidewalks saw the people in the street who loved and accepted them, they clapped and cheered.

They weren’t. It was all for PFLAG.

After an hour, the parade finally ended and people began milling about there on Central. We all went upstairs for snacks and drinks, and had a good time.

It was my first Pride Parade, and it was a gigantic one. And it certainly won’t be my last.